100 Years of Excellence in Science

This article describes about the history of more than 100 years old University of Colombo Molesworth telescope housed inside the observatory dome in the university playgrounds. The telescope was originally owned by Major P. B. Molesworth, born in Colombo, Sri Lanka in 1867 and made his astronomical observations in Trincomalee. He was considered as the finest amateur planetary observer alive in the world during the decade 1896-1905. Molesworth had made important contributions to the study of Mars, but his best work was devoted to a study of Jupiter. A crater about 16 km in diameter on the southern hemisphere of Mars (211° W, 28° S) has been named after him. The telescope goes to the history book of the world astronomy due to another finding – the Jupiter's great South Tropical Disturbance (1901-1939), a complex dusky region in the planet's South Tropical Zone, was first recorded by Major P. B. Molesworth on 1901 February 28 using this telescope when it was housed in Trincomalee observatory in Sri Lanka.

Today this giant grandmaster can be found inside the old observatory dome, the only dome type observatory in Sri Lanka, in the University playgrounds as a museum piece as well as an astronomy teaching tool.

Major Percy Braybrooke Molesworth (Figure 1) was born in Colombo, Sri Lanka (then Ceylon) on 1867 April 2, the son of Sir Guilford Molesworth, the first General Manager of Ceylon Railways. From his surviving papers, one learns that being a Sri Lankan, he first began to record his astronomical observations in the late 1880s. He was to pursue a military career, serving with the Royal Engineers, and rising to the rank of Major. 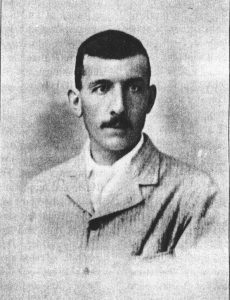 In 1986 he was engaged in perfecting the defenses of Trincomalee. This post had given him an opportunity to pursue his astronomical interests. In 1986 he purchased a 12 ½ -inch (32 cm) reflector from Calver and set it up on the front lawn of his bungalow, from which he could view the sea in one direction and Fort Frederick in the other (Figure 2). His property being several metres above sea level, he enjoyed a superb sea horizon for his work. Moreover, the low northern latitude (85.4°) of his site at Trincomalee was to give him a great advantage over his British co-workers.

Early on he must have decided to concentrate upon lunar and planetary work. Indeed, for the decade 1896-1905 he was said to be the finest amateur planetary observer alive. He made important contributions to the study of Mars, but his best work was devoted to a study of Jupiter.

Molesworth was not merely content to accumulate observations: he wanted to analyze them in-depth as well. His final observations were of Mars in 1905, but he had no opportunity to submit them to the British Astronomical Association (BAA), due to pressure of other work. In 1906 he retired from the Service, but upon returning to Sri Lanka after another trip to England he suffered a severe attack of dysentery and died on Christmas Day, 1908, at the early age of 41. After his tragic death, his friend Walter Maunder was involved in obtaining Molesworth's surviving papers, and transferring them into the care of the Royal Astronomical Society (RAS). 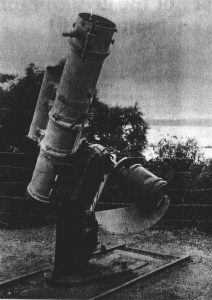 Figure 2. The 12 1/2 -inch Calver set up at Trincomalee. Note the nearly horizontal polar axis, the driving clock, and the way in which the tropical sun has blistered the tube's paintwork (Courtesy: BAA).

In the RAS Journal for 1977 August, Arthur C. Clarke remarked that there is no street in Trincomalee named after Molesworth, but, he continued, 'I am happy to record that at least the International Astronomical Union (IAU) has not forgotten him, for a crater about 16 km in diameter on the southern hemisphere of Mars (211° W, 28° S) has been named after him'.

The Telescope gifted to the Colombo University

After the death of Major Molesworth in 1908, the University of Colombo, Sri Lanka was gifted with this 12 1/2" (32 cm) reflecting telescope by the Colombo Observatory during the early part of the 20th century. This was housed in the Colombo Observatory, near the Reid Avenue entrance to the campus (Figure 3).

The telescope had been in good working order .and several people including the famous amateur astronomer Dr. F. O. B. Ellison, who was the Registrar of the Medical Faculty of the University are known to have used this instrument.

During the last world war, in mid 1940s, the observatory was taken over, without any notice to remove the breakable parts, by the Royal Air Force, who are supposed to have used it to house an Anti-aircraft gun.

Figure 3. The rigid all metal tube of the reflector housed inside the dome in Colombo University with mirror constructed by George Calver (L) and the massive counter-weights of the telescope constructed by Ottaway & Co., London (R).

At the end of the war, the University was left with a telescope housing, a broken diagonal, and a roughly handled mirror. Since then this telescope has not been used for several years. 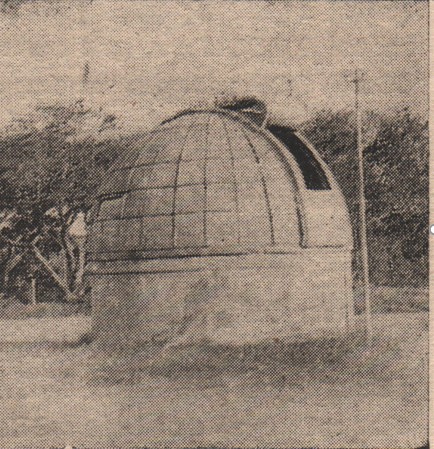 Figure 4. During the 2nd WW, in mid 1940s, the British have taken over the observatory and fixed an aircraft destroying canon inside the dome to shoot down Japanese planes

Sometime in the mid-fifties Prof. C. J. Eliezer the then head of the Mathematics Department ordered a new mirror and diagonal, but the telescope itself was not repaired. During the year 1959 an attempt was made at restoring the telescope and the observatory by the members of the Mathematical and Astronomical Society of the University of Colombo (then Astronomical Association of the University of Ceylon and now renamed as Astronomical Society of the University of Colombo). At that time Prof. Chandra Wickramasinghe and Prof. V. K. Samaranayake, who were undergraduates during those days, had been the President and Secretary of the Astronomical Society. In 1961 the Mathematics Department with the help of the Dean of the Faculty, Prof. A. W. Mailvaganam obtained a grant from the then Vice-Chancellor to repair the telescope. The dome was partially repaired and a set of new eye-pieces, a finder, and Astro-camera were ordered from the United States. However, due to the shifting of the Engineering Faculty which handled the work, to Peradeniya, the attempt came to an abrupt end.

However, after overcoming a lot of difficulties for by now most of the components were scattered around the workshops or lost, members of the newly formed Astronomical Association of the University of Ceylon under the active direction and help of Mr. K. T. Perera, one of the staff members have succeeded in getting the telescope back into working order. In this endeavor, as indicated in the past minutes of the Society, Mr. Herschel Gunawardene who passed away recently, has given enormous amount of help and encouragement at various stages since the 1950's.

The telescope is a 12 l/2 inch (32 cm) Reflector of the Newtonian type solidly fixed on a polar mount. This is housed in an observatory with a rotating hemispherical dome moving on rollers. The telescope has regained its momentum during the 80s with the author became the leader of the observational group of the society as an undergraduate and subsequently as the senior treasurer of the same society. The telescope was in perfect order until such time its eyepieces and heavy brass clock mechanism and many other accessories were looted by vandals in 1988 during the insurgency period of the country. This Molesworth telescope was the king of all telescopes in Sri Lanka. In 1992 under a Japanese grant, with the specifications given by the author (Prof Chandana Jayaratne) who was also the senior staff treasurer of the Mathematical and Astronomical Society, a modern 28 cm portable Cassegrain reflecting telescope was obtained. 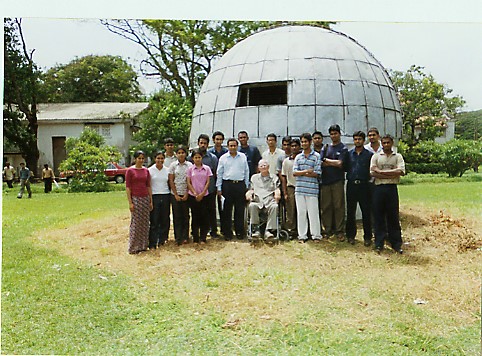 Figure 5. A picture of the observatory dome and the members of the Executive Committee of the Mathematical and Astronomical Society taken together with Senior Treasurer Dr. Chandana Jayaratne in 2003 when Sir Arthur C. Clarke visited the Observatory.

However, the kingship of the Molesworth telescope has not gone down until the commissioning of the 45 cm Cassegrain type biggest telescope in Sri Lanka on 12th January 1996 at the Arthur C Clarke Centre for Modern Technologies, Katubedda, Moratuwa under a Japanese grant. With the experience gained from the Colombo University telescope, the author (Prof. Chandana Jayaratne) was involved with convening the steering committee meetings and also drafting the specifications of the new ACCIMT telescope together with a team of four members.

During its over 125 year history, partly under the care of Captain Molesworth, and later under the care of the University of Colombo and its Mathematical and Astronomical Society (renamed as Astronomical Society in 2016), this telescope has produced dozens of world-renowned astronomers. Quite a few astronomers of Sri Lankan origin serving in NASA and other astronomical observatories all over the world have been inspired by this telescope to pursue their passion in astronomy. Today this giant grandmaster can be found inside the old observatory dome, the only dome type observatory in Sri Lanka, in the University playgrounds as a museum piece as well as an astronomy teaching tool.

Major discoveries and publications made using this telescope

The feature which gave rise to Jupiter's great South Tropical Disturbance (1901-1939), a complex dusky region in the planet's S. Tropical Zone, was first recorded by Major P. B. Molesworth on 1901 February 28.
Some of Molesworth's work appeared in (British Astronomical Association)BAA and (Royal Astronomical Society) RAS publications, but most of it was destined to remain in manuscript form. There were fine papers about Mars in 1903, and Jupiter in 1903-1904 and 1904-1905. In 1896-1897 he found that some of the so-called canali of Mars possessed some structure, an achievement for which Antoniadi praised him, and he discovered 35 new features on the planet's surface. He also identified what he took to be an example of rapid change in a jovian spot as it crossed the disk. In his 1903-04 report, he had already suspected the 90-day longitudinal oscillation of the Great Red Spot Hollow, a phenomenon not generally known until its photo-graphic discovery in the 1960s. In the days when photocopiers still lay far in the future, and in keeping with the practice of many of his amateur contemporaries in reporting work to the BAA, Molesworth happily lent his note books to Section Directors and to others, but in some cases they never came back. The bulk of his observations were published in the BAA Lunar, Mars and Jupiter Memoirs.

This article was prepared based on some of the following references. Some publications on Molesworth's work are also listed below.