The Logo and the Theme Music 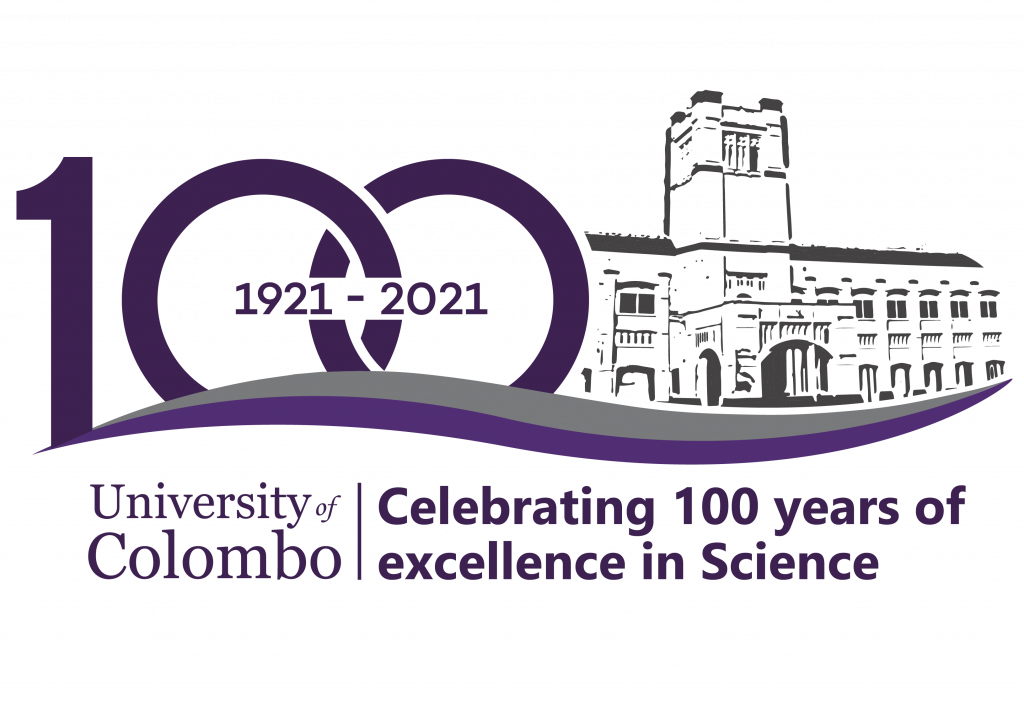 An organization or an institute, no matter how well designed, is only as good as the people who live and work in it. Here we are celebrating not just our final achievements, but the journey of 100 years made towards it. The Faculty of Science, University of Colombo marks 100 years of excellence on 21st January 2021.

Among many other iconic things that remark the festivity of this milestone, ‘The Centenary Logo’ is at the front being the leading role. In the true meaning of words, this simple yet deeply meaningful design proudly presents the education upheld for a century that is rooted in inspiration, ethics, and intellectual inquisitiveness.

In the logo, the founding year together with the centenary year of the University of Colombo, are embedded in a numeric 100. The silhouette of the iconic building of the University of Colombo fills the background. The two symbols rest on a wave design where Purple and Grey colors the design in a lucid flow. The mystery is the meaning hidden beneath this elegant design.

In a very literal sense, the numeric symbols depict the century through which the establishment pioneered and turned the meaning of higher education in Sri Lanka to a novel direction and lifted it to a greater height. However, the intertwined rings of numeric 100 tell another story too. A story about infinite unity and connectivity throughout a century. An unbroken link, everlasting alliance amongst the faculty and students, wisdom and education.

The iconic building of the University of Colombo is an emblem for the university itself. The building symbolizes the land amidst the busy capital which houses both the faculties of Arts and Science under a single roof. It can be quite accurately interpreted as a reflection on the sacred journey of the establishment. It undoubtedly mirrors the hope for the future where the University of Colombo will go from strength to strength, nurturing generations of intellectuals yet to come, as did for generations before.
Waves connote flexible, smooth, but strong movements. This concept perfectly illustrates the changes and novel ideologies associated with the university itself. The everlasting dance of knowledge and wisdom. It’s a perfect incarnation of the university’s motto “Buddhi Sarvathra Bhrajate” the Sanskrit translation for the expression “Wisdom Enlightens”. Besides the underlying meaning of the shape, the colors Purple and Grey themselves suggest a subtle but profound meaning to the design. The rich Purple signifies the majesty of education and wisdom. The contrasting Grey expresses the maturity and sagaciousness of the institution as it completes a century in nourishing Sri Lankan higher education. Together, hand in hand these two colors prelude the diversity; the intellectual diversity, offered by the university, and the cultural diversity fostered within the university. Symbolizing strong and powerful currents that haul mighty ships to their destined ports, the wave interconnecting the iconic building and the numeric 100, denotes infinite advancement of the University of Colombo towards boundless educational excellence.

100 years of glory and success is indefinitely something to be celebrated on a grand scale. Among the many advocates that bring this grandeur before the whole world, the centenary logo itself appears to be the crown jewel. As Nelson Mandela once said, it urges us to remember to celebrate milestones as we prepare for the road ahead. The University of Colombo, the path on the journey towards intellect and wisdom where excellence is not an act, but a habit.

As an alumnus of the Faculty of Science, University of Colombo, it gives me immense pleasure to be contributing to its centenary celebrations in the capacity of a music composer. When I was commissioned the “UOC Centenary Theme” back in December, I couldn’t be happier since I felt it to be just the perfect way for me to pay homage to my alma mater.

This short work runs for 100 seconds depicting 100 years of UOC’s journey since 1921. It opens with a characteristic motif played by low strings which underpins the core of the rhythmic structure. The brass passage in the introduction is reminiscent of a bugle call that sets the ambiance for the subsequent exposition of the primary subject.

I wanted the primary subject to be promptly captivating, enthralling, youthful, spirited and energetic, all the while reflecting the legacy of 100 years. It is in a simple 4-phrase structure and is initially exposed by the French horn. For brief excursions, it touches upon the mixolydian mode and the tonic minor for added contrast. It is succeeded by the second statement of the subject, this time played by the trumpet, with more support from percussion that further embellishes the rhythmic structure. A brief codetta brings the work to a climatic end.

Writing the centenary theme, to me, was not just writing a piece of music, but in fact an expression of my innermost affection towards UOC. I would like to express my sincere gratitude to Dr. Hiran for giving me the opportunity to be a part of this once-in-a-lifetime occasion and I wholeheartedly wish my alma mater the very best in years to come.