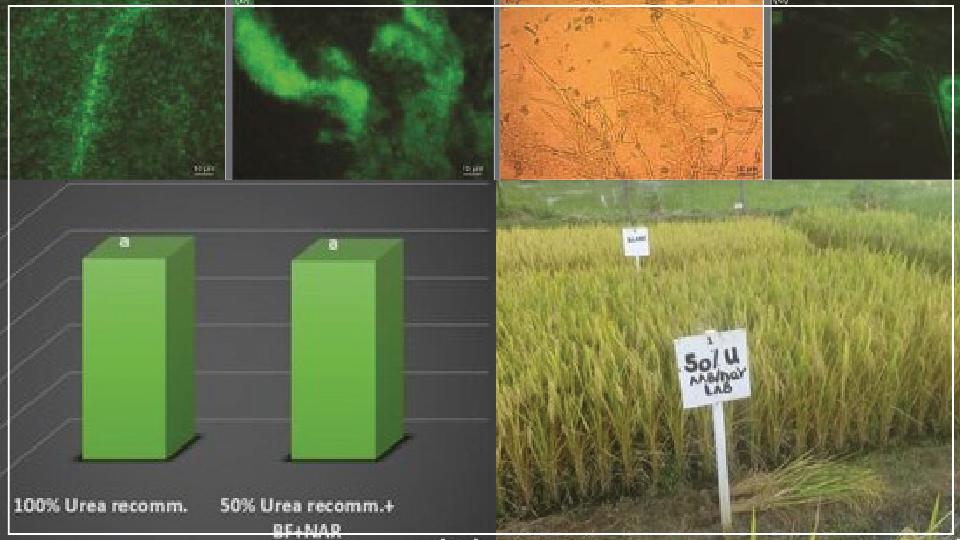 A microbial bio-fertilizer to replace 50% urea usage in rice

Rice is a staple food for more than half of the world’s population. To obtain required rice yields sufficient to feed the increasing world population, with the challenge of decreasing arable lands, increased productivity needs to be aimed at. Specified amounts of inorganic fertilizers containing three major nutrients N, P, K are therefore being added to improve rice plant productivity or to obtain higher yields. Out of the three nutrients, nitrogen is termed as the “absolute necessity” for rice cultivation as it has a direct, positive impact on the growth and yield of rice.  So much so that, if less than required amounts of nitrogen fertilizer (urea) is added, it leads to great yield losses. But on the other hand, excessive amount of nitrogen fertilizers usage can lead to many economic, environmental and health problems. When Sri Lanka is considered, the money spent on importation of urea as well as the money spent on urea subsidies has affected the economy adversely. Even though farmers add excessive amounts of nitrogen fertilizer expecting higher yields, only 30% of added fertilizers are taken up by the plants and the rest is lost from the rice ecosystem through leaching, volatilization and denitrification. The nitrogen thus enters the ecosystem and can lead to many hazardous consequences such as Methemoglobinemia (Blue baby syndrome) in infants, cancers due to secondary amines, respiratory illnesses due to NO–3, aerosols, NO–2 and HNO3, eutrophication of water bodies, ozone layer depletion through greenhouse gas emissions etc.

Even though the incorporation of chemical inputs provides a quick supply of nutrients to the plants, it can negatively affect the soil microbial communities. Nitrogen fixer suppression by inorganic nitrogen fertilizers and reduction of microbial diversity in soil has been documented. In turn this negatively affects the agro-biodiversity and soil fertility that threaten sustainability.

Due to all of the above mentioned problems associated with inorganic nitrogen fertilizer, finding an alternative became a highest priority, and is evident from the global attention the issue has received during the past decade.

Considering all of the above facts, the main objective of this research was to develop a dependable, eco-friendly bio-fertilizer that can substitute urea fertilizer while providing expected rice growth and yield.

The main organism tested for this research was the bacterium Azorhizobium caulinodans. This bacterium was specifically chosen for the project because it possessed many uniquely beneficial characteristics. Mainly, the most beneficial was this bacterium’s ability to live freely in the soil and use freely available N2 from atmosphere and convert it in to the forms that can be utilised by plants (N-fixation).

First, it was necessary for us to determine the ability of A. caulinodans to colonize rice plant roots. Next, if able, to determine the extent and the method of bacterial incorporation that would result in optimum colonization. To determine the above, an accurate method of identification of the specific bacterial colonization on rice roots was necessary and to achieve that the bacterium was labelled with a green fluorescent protein (GFP).  In a pot experiment labelled A. caulinodans was incorporated into the rice roots through several methods and it was evident by the results obtained, that inoculation of A. caulinodans as a biofilm with the fungi Aspergillus spp. (AAB) in the presence of flavonoid naringenin (Nar), the highest colonization of the bacterium was obtained (Figure 1 A and Figure 1 B). 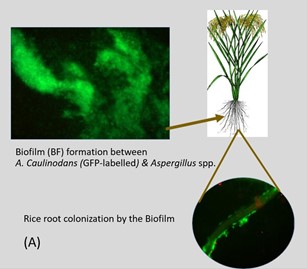 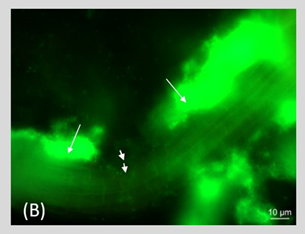 With this positive outcome, next, a set of pot and field experiments were carried out to determine the amount of inorganic nitrogen that can be replaced by the addition of the developed biofertilizer (AAB/Nar).  Four different urea fertilizer levels (100%, 75%, 50%, 25%) were tested. The recommended amount of urea for rice was taken as the 100%. The biofilm naringenin (AAB/Nar) combination was added to the experiment plots with 75%, 50%, 25% urea levels. The growth and yield parameters were observed over three seasons and it was revealed that, 50% of the recommended urea fertilizer with the biofilm and naringenin (AAB/Nar) combination was adequate to achieve the same (or more) growth and yield as with the 100% urea recommendation (Figure 2A and 2B).

Investigation of the actual amount of nitrogen (N2) that the plant gains from the atmosphere was evaluated through 15N isotopic dilution method (15N was analyzed at UC Davis, California, USA).  It was revealed that in 60-day-old plants, more than 60% of the shoot nitrogen has been derived from the atmosphere and after the harvest more than 20% of the nitrogen in the grains had been received through atmospheric nitrogen fixation.

Therefore, it was concluded that through the application of AAB/Nar combination, 50% of urea requirement for the Sri Lankan rice can be replaced without affecting the growth or the yield of the rice plant.

Figure 2: Grain yield (A) and growth (B) of rice with 50% of the recommended levels of urea with the Azorhizobiom biofertilizer in comparison to 100% urea application